Our research reveals how wild wallabies are thriving in the UK

They may be more used to the warmer climes of Australia, but there are more wild wallabies living in the UK than you might think – according to research at the University of South Wales (USW).

Dr Anthony Caravaggi, who specialises in Conservation Biology, has co-authored a research paper investigating the status of red-necked wallabies in Britain.

These mammals, whose scientific name is Notamacropus rufogriseus, are native of eastern Australia, including Tasmania; about as big as a medium-sized dog, with a grey-brown body and the kangaroo family’s characteristic two-footed hop. Like all marsupials, they carry their young in a pouch.

Working alongside Holly English, a PhD student at University College Dublin, Anthony used public records and media reports to explore just how many sightings of wild wallabies there had been in the UK since 2008.

They also looked at what time of year the wallabies were most likely to be spotted, and in which areas of the country.

“I had previously studied wallabies on the Isle of Man, which has a large, stable population,” said Anthony.

“I was also aware of the research of Derek Yalden, an eminent British zoologist who had studied red-necked wallabies in the Peak District for many years.

“There hasn’t been a great deal of attention given to wallabies in the UK, despite fairly regular sightings reported in local media. They are usually assumed to be escapees from zoos, or people simply didn’t believe that what they’d seen could have been a wallaby, as they are not native to this country. 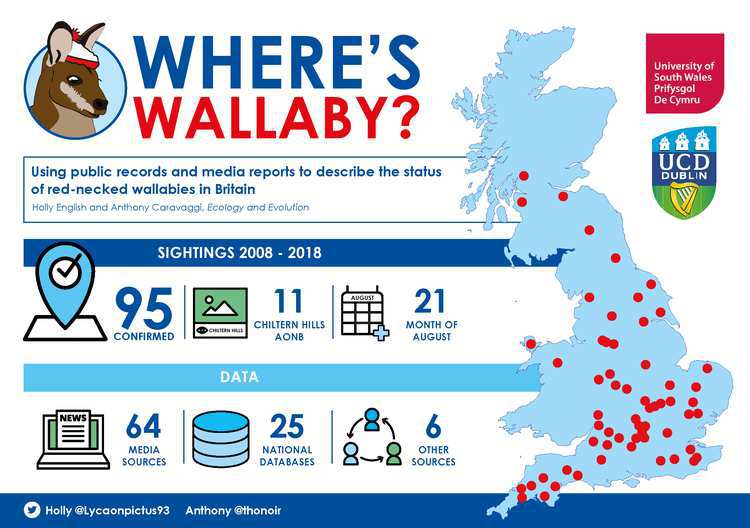 With this curiosity as to how many wild wallabies there may be in Britain, Anthony and Holly set about contacting Local Environmental Record Centres (LERCs) across the UK and the National Biodiversity Network (NBN) to access data on these animals.

They also trawled through media reports as far back as 2008 for mentions of red-necked wallaby sightings. In total, they were able to identify 99 confirmed sightings over an 11-year period.

The study found that the greatest density of wallaby sightings was in southern England, with the Chiltern Hills Area of Outstanding Natural Beauty being a particular hotspot. There were also more sightings recorded in August than in any other month.

“It might come as a surprise that there have been so many sightings, but the fact is, wallabies are really good as escaping – they are fast, and able to leap some obstacles – so more of them end up roaming the British countryside than people might imagine. It’s possible that they’re breeding, too,” said Anthony.

“In recent years they have become very popular not just with zoos and wildlife parks but with smaller petting farms and other tourist attractions.”

The research paper has been published in the journal Ecology and Evolution, an open-access publication. Read it in full >>

As for future studies, Anthony would like to reach out to academics, ecologists and inhabitants of the areas of the UK where wallabies have been spotted to get more information on the population.

“Much of the red-necked wallaby ecology and behaviour in Britain is relatively unknown, so I believe that further research into them is warranted. These curious and charismatic mammals deserve more recognition.”