Determining the original source of the stones of Stonehenge

The iconic Neolithic monument of Stonehenge, UK, is a testament to the skill and ingenuity of its builders.  One question, of considerable significance, is where were the stones used in its construction from? The stones fall into two groups, the larger sarsens, which weigh on average 25 tons and are thought to have been sourced from areas close to Stonehenge, and the so-called “bluestones”.  These “bluestones” comprise a variety of igneous and sedimentary rocks weighing between 1 and 2 tons and most of them come from the Mynydd Preseli area in west Wales over 220 km from Stonehenge.  However, one Stonehenge bluestone, a sandstone, is very different; it is geologically younger than all of the other bluestones and cannot be matched to rock outcrops in the Preseli mountains. This is Stone 80 – the so-called Altar Stone – and one long-held idea is that it matches rocks found to the south of the Preseli Mountains, on the shores of Milford Haven, an arm of the sea which opens out onto the Bristol Channel.

With support from a USW research grant, USW geologist Duncan Pirrie has been working with colleagues Richard Bevins (Amgueddfa Cymru - National Museum Wales) and Rob Ixer (Institute of Archaeology) on the detailed petrography of the stones of Stonehenge, and the implications for our understanding of where they were from.

Our paper, published in the Journal of Archaeological Science, compared the Altar Stone with sandstones from the proposed source at Milford Haven.  As standard petrographical methods are not robust enough to clearly show the full mineralogical and petrographical data needed to distinguish between the sandstones we used automated energy dispersive X-ray spectroscopy to determine the minerals present in the rocks. In collaboration with colleagues in the Finland Geological Survey, these data were combined with the isotopic age dating of tiny zircon crystals present in the sandstones. The results, the first-time automated modal mineralogy has been used for lithic provenancing, show that the Altar Stone could not have come from the sandstones exposed at Milford Haven; its mineralogy and zircon age profile are very different. 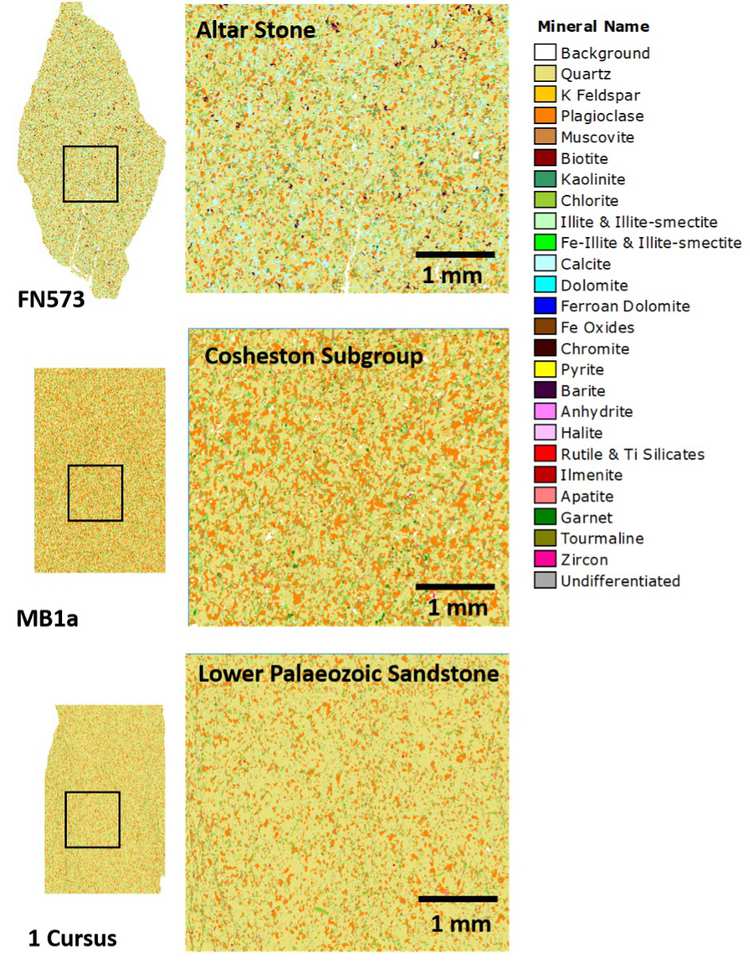 Figure 1: The detailed composition of the Altar Stone and the sandstones from Mill Bay was mapped using automated scanning electron microscopy.  In this image, each colour relates to a different mineral, allowing the different samples to be distinguished.

Demonstrating that the sandstone could not have been sourced from Milford Haven challenges previous ideas about transport routes. Because of the previously assumed presence of this ‘coastal’ sandstone at Stonehenge it had been suggested that the igneous bluestones were transported southwards from the Preseli Hills down to Milford Haven.  With the Altar Stone collected along the way, the stones would then have been transferred onto rafts, and transported by sea up the Bristol Channel. This coastal sea route has been popular for many years; indeed, a number of attempts have been made to replicate the journey. However, if the Altar Stone does not come from Milford Haven then there is no scientific evidence to support this transport route.

The quest is now to find the real source of the Altar Stone. We can exclude areas in West Wales as there are no suitable geological sources. When the source is located the implications for transport routes can be explored.